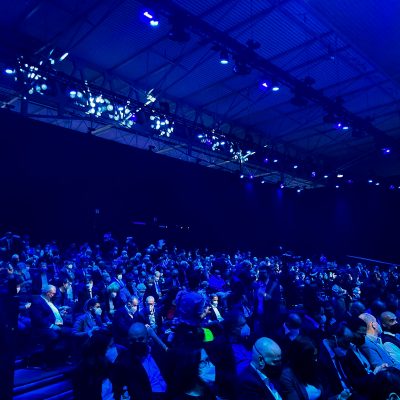 MWC 2022 comes to an end for another year. Like for many others it was our first flight in 2 years since the start of the pandemic.

But what did I learn?

Connectivity is fundamental for prosperity

We need to continue to ensure that people are connected. As societies become more dependent on digital services, those who do not have access to the digital world are left behind. It is good to see the mobile community continuing to try and close this gap.

Connectivity is no more than a means to an end

Although it is called the “Mobile” World Congress, 5G is a multi-access connectivity standard where mobile is only one of many other access technologies. This was reflected in even the Operators being more interested in use cases than in the connectivity technology itself. Not sure whether the robot barista on the Telefonica stand or the Oral B €500 digital toothbrush are representative of this, but it gives you a flavour.

A new breed of Telco leadership

Those of you who had the privilege of sitting in on the Rakuten Symphony Telco transformation presentation can only have been inspired as they shared what they have done on a live network. This takes courage! Tariq Amin said he had chosen partners based on the same outlook and vision and willingness to embark on the journey and not on their compliance related to an RFP, which those of you who work with smaller vendors will recognise as the valley of death for innovative companies. I would add that I was able to speak to Tariq directly after the session and he was personable and interested. This openness and willingness to engage I find commendable and refreshing.

Operators have had their own data centre for many years which with the right technology evolution provided them with a private cloud under their control both technically and commercially. What is often missing related to the discussion on hyper-scalers is that they have a tendency for updating protocols, interface and even data models without telling partners. Partners who insist on sticking with the older cloud version are penalised and the cost model spirals out of control.

The digital world. Use it for good.

Like any new innovation it can be used for good or bad. In today’s world where facts don’t seem to matter and fake news, if plausible, is absorbed by the masses, the bond between government and the population and between the people themselves are under strain. We need to ensure that there is a level playing field between all those who have the responsibility for digital content.

Regulations and the cloud

Over the last few years we have seen the acceptance of the cloud and have become familiar with the services of hyper-scalers. This does not apply only to the consumers but also to the regulators. Technology today allows you to scale horizontally but also dynamically apply local policies from one infrastructure. This is the main economies of scale which cloud infrastructure can provide. This means that instead of many silos you potentially can have multiple policy areas of jurisdictions on one cloud.

With the virtualisation and disaggregation of both the core and RAN networks Operators will now be forced to take more ownership with regards to the interworking of the constituent parts. The Operators saw Open-RAN as an opportunity to avoid vendor lock in, but ultimately whether Operator, Integrator or Vendor take responsibility there is an overhead which needs managing not only to ensure the technology stack works on day one, but also in the future as the network requirements change and evolve.

Having dinner on Thursday night I was told that the best way to think yourself into the Metaverse is to watch the Matrix.  Whatever views you might have, economic growth can no longer be delivered by extracting the earth’s resources which are finite. The Metaverse opens up a world which doesn’t have such boundaries.

The city of Barcelona and the organisers created a safe environment to do business. Everyone was following the rules which kept us all safe. So thank you!

The first question you need to ask someone who says they want to use 5G, is what is the use case, because 5G is a set of access technologies and comes with a set of parameters which need to be considered. To enable this in the network this requires zero touch automation and E2E service orchestration.

There are 7 competing conglomerates who are currently vying to provide connectivity from above as an alternative overlay network to terrestrial services. The performance and size format of antennae is making this a reality. Although there will be a continual need for terrestrial services the ability for these services to provide a better cost/ performance to terrestrial RAN stations is something Operators need to be mindful of particularly where you have low population density.

Last but not least, I was brought up in West Germany and during that time West / East Germany and the cold war were things which were very real. I remember celebrating the falling of the Berlin wall and the hope that society had moved on from these dark ages. It is abhorrent what is happening in the Ukraine and to the Ukrainian people. My thoughts during MWC were with the Ukrainians within and outside of the Telco sector.